An Artistic Call to Action
to Environmental Education News 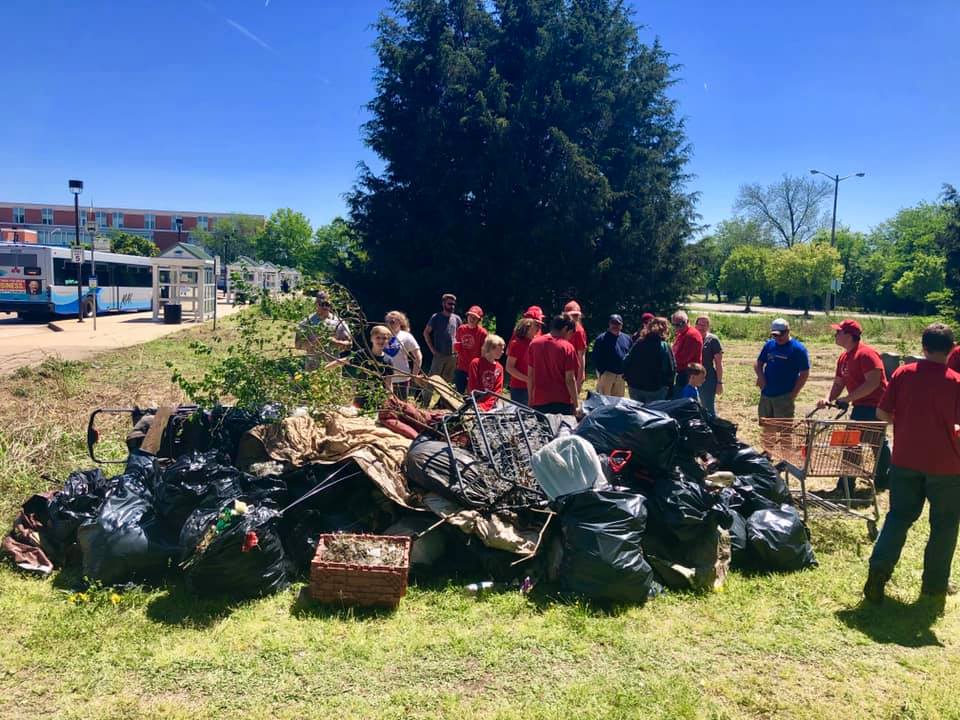 On May 3 & 4, more than 1,000 volunteers came together across the region in support of the Great American Cleanup - hauling nearly 15 tons of litter from Hampton Roads neighborhoods, streets, parks and waterways. In addition to removing trash and debris (including appliances, TVs, couches and over 150 tires) they also beautified community gardens, improved shorelines with wetlands grasses and planted new trees. In total, 71 public spaces were improved during this two-day regional initiative the askHRgreen environmental education committee calls “Team Up 2 Clean Up.”

Not all litter collected was destined for the landfill, however. Volunteers set aside interesting finds such as flattened metal containers, furniture fragments and anything out of the ordinary for use by local artist, Sam Hundley, who partnered with askHRgreen to take the trash collected and transform it into an art piece to commemorate this year’s regional cleanup successes.

Sam calls the art “A Public Service Announcement.” In it, he pays homage to the classic PSA from Keep America Beautiful in the 1970s when Iron Eyes Cody, an actor in Native American garb, paddles a canoe on water that becomes increasingly polluted along his journey. As he stands amid the litter, the camera zooms in on a single tear streaming down his face.

You’ll notice the old comb serves as the feather in his hair, his body is formed from an old baseball hide, his head a plastic television frame fragment, and a single teardrop streams down from his eye courtesy of a discarded measuring spoon.

Sam and the askHRgreen team hope this work of art will help to serve as a call to action to engage more volunteers and participants in cleanups, beautification and recycling events throughout Hampton Roads.  As the artwork travels around the region on display in various public places, our hope is that citizens would be inspired to get involved and host their own cleanups in their own neighborhoods.

Sam Hundley, born and raised in Phoenix, worked as a newspaper artist and designer for almost four decades, three of them spent at The Virginian-Pilot in Norfolk. He retired in late 2017 and became a self-described "scrap artist." He views his work with found objects as a natural progression from having spent so many years communicating the ideas of others as a news artist. Now, he creates his own kind of folk art mostly to please himself, although he's pleasantly surprised at the number of people who also like what he does. He lives and works in Ocean View with his wife, Lynn, and beagle, Theo.