On Wednesday January 4th 2012, the Bureau of Labor Statistics (BLS) released estimates for metropolitan area payroll employment and unemployment rates. Hampton Roads experienced a second straight month of increasing employment, but only added 2걄 jobs combined in October and November, versus the 52꼀 deficit in payrolls since peak regional employment in July 2007. Since then Hampton Roads has seen three other periods of increasing employment lasting two-months, but employment resumed its decline each time. The nation and, to a lesser extent, the state, have experienced stronger labor market growth than the region over the past year.

Year over year employment has grown most strongly in government supported industries, including federal government (+2) and education & health services (+1), but the administrative & support services industry has also added jobs (+1). Construction & natural resources payrolls have declined by 2 since November of 2010, and there have been declines in scientific & technical services (-1) and retail trade employment (-1). While leisure and hospitality employment saw the second largest year over year declines (-1꺜), it is not clear whether this is weakness in the industry, or whether this reflects weakness in off season tourism in an overall strong tourism industry. 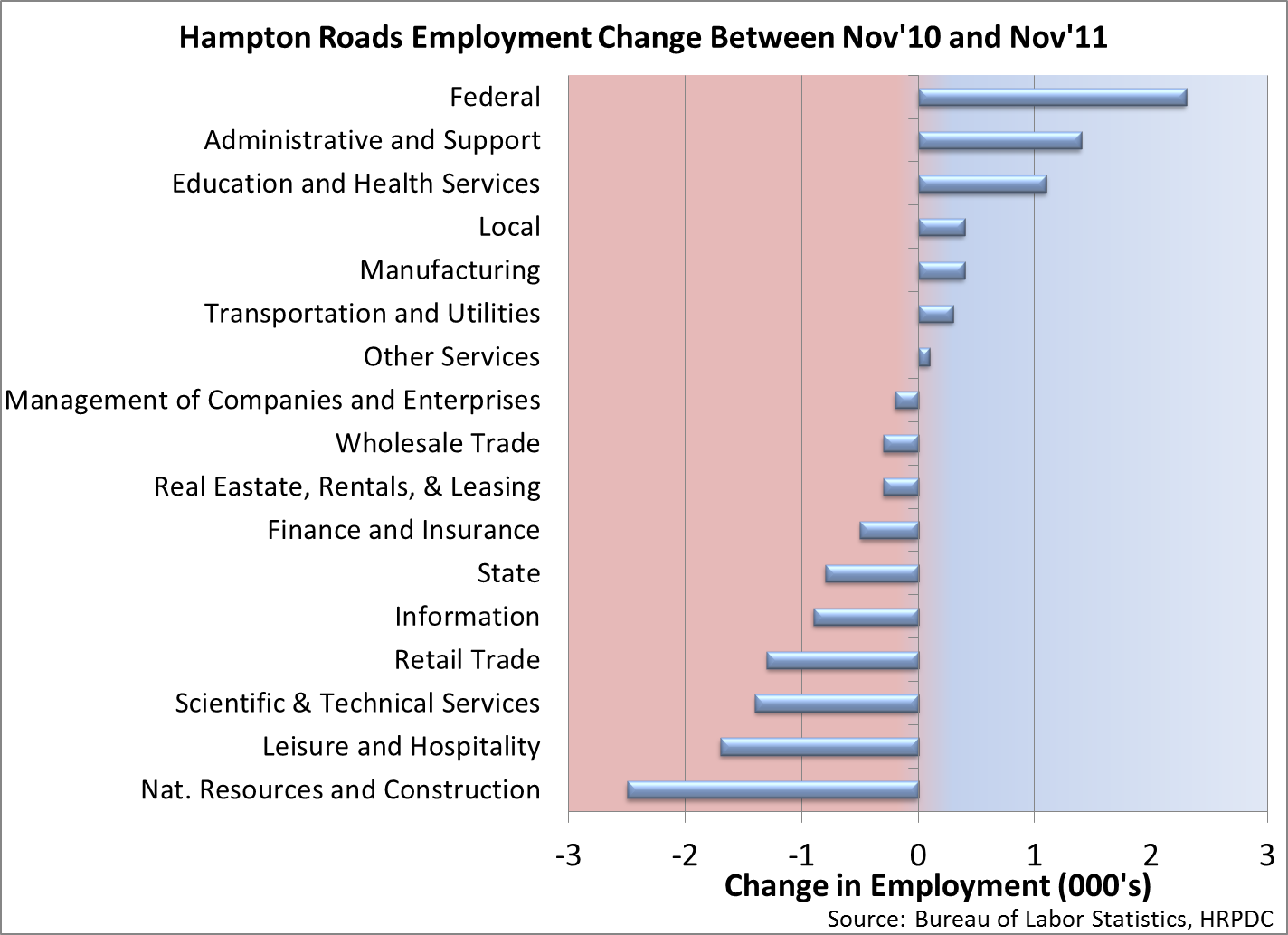 The regional unemployment rate began to decline again after spiking up between May (6.74%) and October (7.32%) of this year. This decline was caused by a 1 person decrease in the labor force, coming mainly from the ranks of the unemployed (-1). The seasonally adjusted employment rate decreased to 7.21% in November. The national and state unemployment rates have been declining for a more significant duration allowing stronger long term trends to manifest. The unadjusted unemployment rate fell to 6.73%, though the decline in the unadjusted rate largely derived to the Hampton Roads seasonal decline in labor force between August and November (seasonal decline means that it is a repeated pattern that is unrelated to the movement of the labor market).

The Hampton Roads Planning District Commission (HRPDC) fully complies with Title VI of the Civil Rights Act of 1964, the Civil Rights Restoration Act of 1987, Executive Order 12898 on Environmental Justice, and related nondiscrimination statutes and regulations in all programs and activities. HRPDC's website, www.hrpdcva.gov, may be translated into multiple languages. Publications and other public documents can be made available in alternative languages and formats, if requested. HRPDC public meetings are always held in ADA-accessible facilities and in transit-accessible locations when possible. Auxiliary services can be provided to individuals who submit a request at least seven days prior to a meeting. Requests made within seven days will be accommodated to the greatest extent possible. Any person who believes they have been aggrieved by an unlawful discriminatory practice by HRPDC under Title VI has a right to file a formal complaint. Any such complaint may be in writing and filed with HRPDC's Title VI Administrator and/or the appropriate state or federal agency within 180 days of the alleged discriminatory occurrence. For more information on HRPDC's Title VI program, or to obtain a Title VI Complaint Form, please call (757) 420-8300 or email kmiller@hrpdcva.gov.
©2012-2019 Hampton Roads Planning District Commission. All Rights Reserved. Privacy Policy | Sitemap
Questions or Comments? Click Here