Hampton Roads’ seasonally adjusted civilian employment increased by 1,200 between Jul-14 and Aug-14, the fourth straight month of job gains. The 4,600 jobs the region gained since May-14 bring total regional civilian employment to 762,000.  Hampton Roads’ employment is still 27,200 jobs below its Jul-07 peak, and 300 jobs less than last year. If the region gains jobs at its long term average rate of 516 per month, the region will not achieve the pre-recession peak until Jan-19, more than four years away (the region has only gained an average of 467 jobs per month since Mar-11). 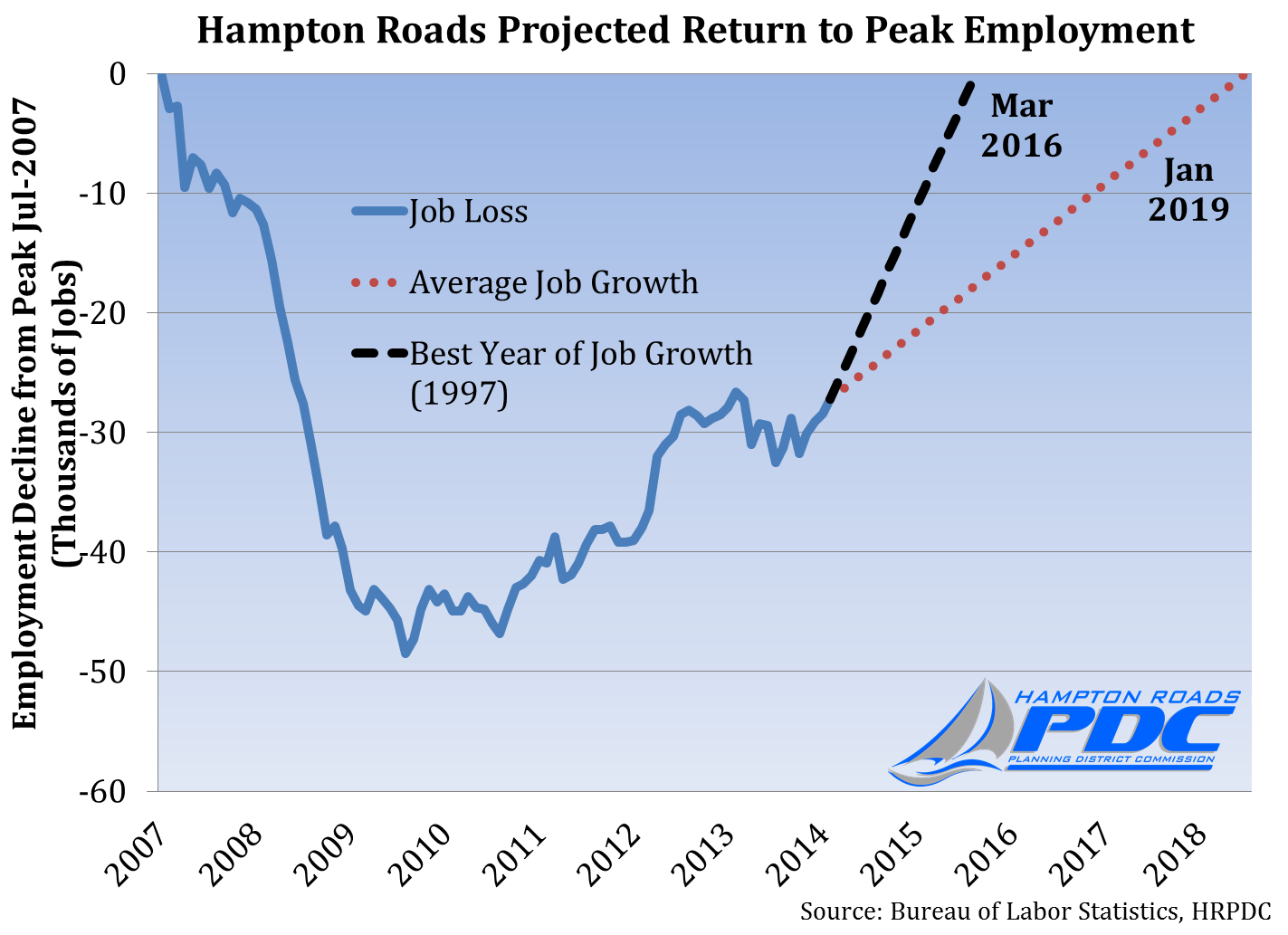 In contrast, The Nation has exceeded its prerecession peak employment by 0.5 percentage points, and The Commonwealth has recovered 99.9% of its employment (down 5,000 jobs).

Federal government (-1,100) and scientific & technical services (-4,100) are both down significantly year-over-year (Aug-13 to Aug-14). Since employment in both of these industries are tied to the federal budget and defense contracting, the situation in Washington will have a significant impact on their future prospects. Regionally, retail trade (+3,100) has grown strongly year-over-year, but that pace has ebbed from the July year-over-year growth (+3,900), indicating that tourism’s impact on retail employment has grown more pronounced. Finance & insurance (1,100) employment has grown in the region, as well as employment in education services (1,300).

Hampton Roads’ seasonally adjusted employment increased to 5.8% in August, from 5.7% in July. The region’s labor force and persons employed have shrunk for the past 3 months, both of which indicate issues with the regional economy. The Commonwealth has also seen a spike in its unemployment rate recently, and both Hampton Roads’ and Virginia’s poor performance with regards to unemployment stem from the dependence on federal government expenditures.

The Hampton Roads Planning District Commission (HRPDC) fully complies with Title VI of the Civil Rights Act of 1964, the Civil Rights Restoration Act of 1987, Executive Order 12898 on Environmental Justice, and related nondiscrimination statutes and regulations in all programs and activities. HRPDC's website, www.hrpdcva.gov, may be translated into multiple languages. Publications and other public documents can be made available in alternative languages and formats, if requested. HRPDC public meetings are always held in ADA-accessible facilities and in transit-accessible locations when possible. Auxiliary services can be provided to individuals who submit a request at least seven days prior to a meeting. Requests made within seven days will be accommodated to the greatest extent possible. Any person who believes they have been aggrieved by an unlawful discriminatory practice by HRPDC under Title VI has a right to file a formal complaint. Any such complaint may be in writing and filed with HRPDC's Title VI Administrator and/or the appropriate state or federal agency within 180 days of the alleged discriminatory occurrence. For more information on HRPDC's Title VI program, or to obtain a Title VI Complaint Form, please call (757) 420-8300 or email kmiller@hrpdcva.gov.
©2012-2019 Hampton Roads Planning District Commission. All Rights Reserved. Privacy Policy | Sitemap
Questions or Comments? Click Here